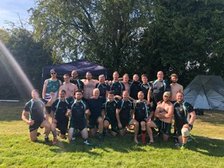 With the highs and lows of pre season, the mighlt salmons were ready to go off like a bull in a china shop at this weekend tournamant

Over the last couple of months, Lightwater have grown from strength to strength. The squad has grown closer with amazing socials organised by our social sec Mark, the return of the youngsters from their loan transfers to university sides as well as the deliveries of new stash and much more in the pipeline making us the best kitted team in then whole of the UK.

Over the summer months, the team have been putting in the hours at Monday and Wednesday pre seasons session, testing the fitness and mental capabilities of the players. Over the weeks it became apparent that some of the backs have slipped in to a more rotund shape questing their future playing positions. The every approaching midage transfer from the backs to the forwards is looming and these players will be put on to a strict yoghurt only diet as trialed by our never present captain.

The club has also been privellaged to have gained a celebrity following by the European player of the season, Alex Goode. The club rose to fame with the social of all socials orgnised by Mark, Alex Goode - Full kit summer social. This social brought the best and worst out of the team but brought the partners together so they can start to understand that Saturdays are for the boys and rugby, sorry ladies. The pictures put up on our Instagram were liked and commented on by the Saracens15 as well as our one and only Gorgeous George being able to present and persuade Mr Goode to wear the club tie, thank god it wasn't the club blazers due to the high risk of flammability.

Onwards to the tournement. the team assembled, although be it in true Lightwater fashion over a sporadic time period. Due to a last minute team drop out, we scrambled a side to face our first game as this was pulled forward by quite some time. with the warm up of a few puffs on cigarets, monster cans and copious amounts of tape and deep heat, the team managed to put together a convincing 14-0. There were a few players out of position but a few organised set pieces and the newly signed International Player running around like a rat up a drain pipe raised the confidence of the side moving forward.

As the belief of the squad grew, they went on to play a strong Midhurst team and pulled a 17-10 win. Matt major was busier than a one armed brick layer in Baghdad and was complimented by the oppositions captain for his efforts throughout that game. The most surprising effort of the game was our skinny legged not so skinny bodied player taking an intercept on our own 5m line and being able to run the full length of the pitch with the opposition tearing down on him.

During the rest before the next game, out token South African Claire, Harry Potter's arch nemesis and our resident nudist all arrived to provide much needed rest bite for some players and increase the depth of the squad. with Guildfordians and Haslemere in the next two games, Lightwater took a narrow 7-0 loss and an exceedingly tight 7-7 draw. the reports of these games are vague. however, there has been a revelation as our one and only Adam Shirley has taken the leap from wing to hooker and has totally transformed his playing style, providing us with ever more depth in the squad.

After the two tight games, Lightwater were able to win the final game 19-0 ensuring that the squad secured the 2nd place prize and now have some silverware to hang in the cupboard.

The day wasnt without its set backs, the ever present Jon Batt has now totally ended his shoulder even having played a day after his pre-op meeting, Lewys and Brydon have damaged their thumbs, Oli will be missing the start of the season with a broken thumb and is awaiting further surgery and Bren's knee is now a similar size to his head.

A special mentions to say thanks to Haslemere for hosting the tournament and putting on a action filled day.